We were back in the studio last week to record a couple of new tracks with Rory. We're building up a big pile of songs to choose from for our debut album and are in the process of seeing how stuff comes out. Anyway here's a song from that session. It's called 'Big Wave'.

It's been a while.

We've been busy with all the other stuff that comes with life like making the bed every single day and getting terribly jealous because the next door neighbour's got a persian rug delivered.

Anyway Summer is almost upon us which can mean only one thing. It's show time.

Here's what we've got in the can so far:

7th May - w/ Over the Wall @ Spanky Van Dykes, Nottingham

We should hopefully be adding some more dates soon. 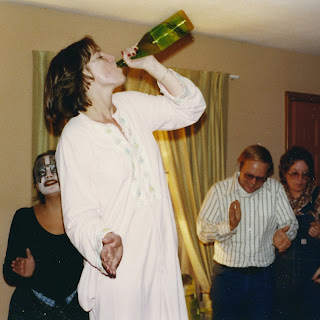 Stag b/w Ascending will be released on Monday 21st February 2011 as a strictly limited edition 7" on hand numbered, light green vinyl (500 copies - single pressing only). It comes in a beautiful, full colour, 300gsm, matte finish, card sleeve and will include a download code for high quality digital versions of the songs.

Additionally each copy will be screen printed by hand (by Pete from the band) with some lovely logo typeface designed by our friend Norman (www.wasteyourself.com).

This coming Monday (Sept 20th) we’re playing with indie pop LEGENDS The Vaselines at Rescue Rooms in Nottingham. Right now as I type this I’m reliving the time when I was an angsty, sexually repressed teenager pouring over the first Vaselines record back in 1995 sobbing about girls and stuff. Weird times...

It’s their first proper UK tour for 20 years (I think).

Kurt Cobain was a Vaselines super fan covering no less than 3 of their songs with Nirvana (Molly’s Lips, Son of a Gun and Jesus Don’t Want me for a Sunbeam). Cobain even went as far as naming his child after Frances McKee from the band.

My friend recently sold their ‘Dum-Dum’ album on Ebay for insane money. It went a good chunk of the way towards the purchase of his new Fender Telecaster.

They have a brand new record out called ‘Sex with an X’ which is their first for 20 years and is supposed to be completely ace (I haven’t heard it yet).

Frances McKee is looking totally sexy these days. She’s gone all 40-something, yogic, hipster mum which I’ve just discovered I’m totally in to.

Come to the show and buy two copies of the new record on vinyl and politely ask the band if they’ll sign them. Sell one on Ebay to a half-crazed Japanese collector for loads of £££ and keep one for yourself to treasure forever thus effectively bankrolling your whole evening, covering your record buy (probably) and also helping to line the pockets of totally deserving cult indie royalty.

E-mail your name (or names) to fistsmusic@googlemail.com and we will add you to our special discount guest list meaning that you can get in on the door for just £6 on the night (advanced tickets are £10).

We’re playing these dates with the awesome Sparrow & the Workshop who we ambushed at Y Not Festival and foisted a CDR onto. Our secret plan worked!

The secret plan is still yet to work on Damian from Fucked Up and that guy from Future of the Left. They must have lost our e-mail or something...


PS - People from Nottingham please come to the Bodega show. We can get you in ridiculously cheap (£3), it’s on a Friday night and we basically don’t want to look like a bunch of losers in front of our new friends by playing to 6 people in our home town. Oh and of course it will be really good!

Here’s a pop video that Sparrow and the Workshop did for my favourite Sparrow song:

25% Discount for Truck Festival which is in 2 weeks time!

We've been given this tickets link to share with you for a 25% discount off a weekend ticket (normally £80 but available for £60 from this link) to Truck. These are only available in limited numbers so if you've decided you're going then it's probably best not to dilly dally.

Here's the link for those discounted tickets.

For those of you who haven't heard of Truck. Truck is a little festival (about 5000) on a farm in the beautiful Oxfordshire countryside. They're into biodiversity and supporting the local community. Profits from the festival go to charity. The local vicar sells the ice-cream. The Rotary Club do all the catering. Despite sounding a bit village fete it's actually a festival for cutting edge alternative music, hosting stuff like 16 piece space-drone orchestra Flowers from Hell, noisy bastards like Fucked Up and Future of the Left and old hands like Teenage Fanclub and Mercury Rev. There's also buzzy, teen indie from the likes of Egyptian Hip Hop and Pulled Apart by Horses as well as tonnes of other stuff from pastoral folk and Americana to bleepy electronica and Grime. It's probably best just to read the line-up.

We'll be playing the Last FM Stage at Sunday lunch time (11:50-12:20). Our stage is by the Village Pub. If you're anything like me you might well be still lying in your tent, baking half to death, completely naked from the waste down with the mother of all hangovers at that point. If you're not like me (or you got lucky) and you feel good and are out and about in the sun (hopefully) then pop along and give us a bit of support. We'd be well grateful.

Take care folks and hopefully catch some of you there.

As you may know some of our members are also involved with other stuff. Firstly Theresa has formed a new band with Joey Chickenskin called Burly Nagasaki. They're an oddball mash up of surf rock, twee-pop, rock n roll, power-pop, horror soundtrack, homage and conceptual art all jostling about together in a weird stew. They're really good fun and will be playing at Dot-to-Dot Festival (Nottingham) on Saturday 30th May at the Trent Uni Glo Bar at 2pm. Make sure you check them out.

Also, Dave our bassist (who we share with the fabulous Cult of Dom Keller AND Cuban Crimewave) was recently in the studio with Cult of Dom Keller to record their debut album with legend guitarist/producer Doggen (Spiritualized/Julian Cope). Dave says it was the best recording experience he's ever had in his life and that they did most of the songs in a single take!! Needless to say I'm totally desperate to hear (be sick with jealousy about) the results. Keep your eye on their Myspace.

Finally, Pete will be watching football for pretty much ALL of next month. He's been waiting for 4 years for it so please do not attempt to book us for any shows (unless of course they are actually at the World Cup). That goes to you as well Eavis with your empty Friday night slot at Glastonbury this year.

Hi folks a little update (but mainly a test run of Ping.fm).

We've been keeping a bit of a low profile lately to concentrate on writing some new stuff. It's turning out pretty good. It's a bit darker and weirder than we've ever sounded before. If I was a rubbish hack I would say that the new Fists stuff is the soundtrack for the 'age of austerity' and a howl at cold war ghosts, North Korea! Obviously that's total nonsense like most music journalism these days and of course it doesn't sound anything like that at all. A more realistic clue on how I think one of the songs is shaping up are the words 'sister', 'ray', 'shitter', 'poppier' and 'Fists' if you can imagine such a thing. We'll be committing the whole lot to tape in a mad flurry of sweat and valves this coming July somewhere in Dalston after which you can make up your own minds.

Live vids from our EP launch at The Rescue Rooms back in April. x

Video for 'Ace is the Way' by Little Kingdoms

Brand new video for 'Ace is the Way' off our new EP 'Olympic Hits'.

Fists 'Ace is the Way' from Little Kingdoms on Vimeo.

We're having a big party to celebrate the release of Olympic Hits EP. Out on Hello Thor Records on March 29th 2010. Here's the poster and deets. 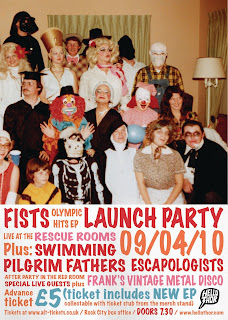 FISTS' sound is a sprawling, ever-shifting amalgam of DIY music genres spanning the past 50 years. From the skiffle punk of '6 5 Special' and the country twang goes indie-pop of 'Cockatoo' to the Stereolab/Velvets drone of ‘Skit’. Live, Fists are a woozy, kaleidoscopic and riotously fun affair. www.myspace.com/fistsmusic

PILGRIM FATHERS have been described by someone else as: ‘a 50 million-year neo-psychedelic death trip through all the galactic touchstones: Orion’s Belt, Destiny’s Rainbow, Brocchi’s Cluster, Pegasus’ Great Square’ and by themselves as “The same sound as when you open a door and there is another dimension behind the door and there’s a band playing behind that door to the other dimension”, and finally by us as ‘awesome slabs of mind melting psychedelic post-rock’. www.myspace.com/thepilgrimfathers

ESCAPOLOGISTS have been on a weird secretive trip over the last 2 years. A trip that has seen the line-up shrink and expand again whilst their sound has undergone a radical evolution, from epic stabs of proggy, indie rock about the universe and science to a new, synth-heavy, drum machine backed, dark pop vehicle that segues oddly disparate touch stones like psychedelia, hip-hop and electro together in ways that absolutely work!!

PLUS...After-Party in the Red Room:

Advanced tickets £5 available from the Rock City box office and at www.alt-tickets.co.uk. / more on the door.

Advanced ticket holders will receive a FREE copy of the brand new Fists EP (just swap your ticket stub at the merch stand on the night!)
at 17:22 No comments:

We're down in London this weekend for a couple of shows. First one is at the Buffalo Bar in Islington with The Leaf Library, Marcel and our good friend Andy aka We Show Up on Radar. £5 ticket. Second is on March 27th as part of an all-day line up at The Stag's Head (also Islington I think) with a load of bands from Nottingham and elsewhere and it's FREE!!

We're also hoping to head down to the 6Music protest at Broadcast House on the same day and might try and do some songs at that too.

Just thought I'd add this message from our record label Hello Thor. We're totally gutted about the likely end of 6Music as they've been massively helpful and supportive of us since the very early days. There just isn't a platform of this size and as indiscriminate as 6Music for weird little indie bands like us.

Here's Hello Thor's original message with some pointers on what you can do:

As you may be aware, a document was leaked this morning (26-02-10) detailing BBC plans to close 6Music, along with the Asian Network, and parts of the BBC website. For a label like Hello Thor, 6Music is a valuable outlet and one of the few places where small, independent labels can get their music heard. If 6Music were to close it would be a great blow to us, artists associated with us, and labels/bands up and down the country.

It would be great if you could make your feelings about the proposed closures to the following people: